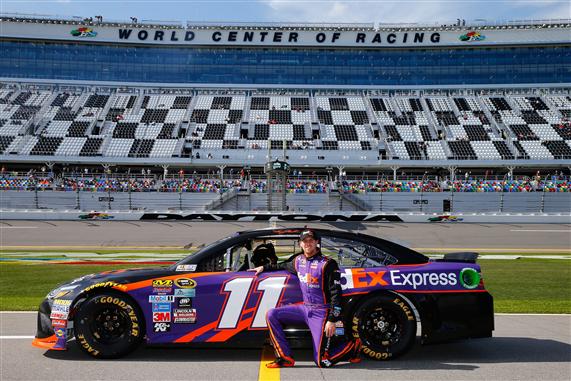 The 2017 NASCAR season is right around the corner. In order to get fantasy teams ready for the new season I decided to recap the 2016 season for my top 30 drivers and preview how I think they will perform this year. Each day I will post two driver previews until my No. 1 fantasy driver is revealed. I will continue my rankings with Denny Hamlin.

2016 RECAP: Denny Hamlin had a good season in 2016, but he is still looking for his first championship in NASCAR’s top level of driving. Hamlin started off the season on fire by winning the Daytona 500 and then finishing third at both Phoenix and Las Vegas.

Hamlin was the best qualifier in the sport last year. He started in the top 10 in 33 of the 36 races. The problem is that he finished 14 of those races outside the top 10. This hurt his value in Fantasy Live since he did not score many bonus points for position differential. Hamlin was able to lead 524 laps throughout the season. That helped his value a little bit if you were able to find the tracks where he could keep his car up front (Daytona, Sonoma, Richmond and Martinsville).

Denny was one of the best specialty track drivers in the sport last year. He scored the most points (125) at the road courses (Sonoma and Watkins Glen) and the sixth-most points (171.5) at the Superspeedways (Daytona and Talladega).

Most fantasy players know that Hamlin always performs well at his home state of Virginia. Once again he ran well at Richmond and Martinsville in 2016. Hamlin finished sixth at the first race at Richmond and won the second race from the pole (lead 189 laps). He crashed in his first race at Martinsville but came back in the fall and finished third. Hamlin is one of the best fantasy choices at the tracks in Virginia.

2017 PREVIEW: Joe Gibbs Racing was the hottest team until the Chase began. They ran well in the last 10 races, but Hendrick Motorsports was able to catch up to them. I expect JGR to be the team to beat at the Superspeedways, short tracks, Indianapolis and the road courses. They seem to be a tick behind HMS on the 1.5-mile tracks, but that could change over the offseason.

Everything will be the same with the No. 11 team in 2017. Mike Wheeler will once again be the crew chief and Federal Express will be the primary sponsor. The only change for the team will be the addition of Erik Jones to the Toyota Racing team. This will give Hamlin one more driver to compare notes with this season.

Hamlin is one of the easiest drivers to predict in fantasy racing. You can pencil him in for top-five finishes on the Superspeedways, Martinsville and Richmond. He should be considered for top-10 finishes at Sonoma, Watkins Glen, Phoenix, Indianapolis, Darlington, Chicago and Homestead. The rest of the tracks are too risky to use Hamlin at. He may finish in the top five at some of the other tracks, but I think there are safer picks in the field.

Hamlin was placed into Group A of Yahoo Fantasy. It will be hard to use all nine allocations with Hamlin in 2017 because there are better choices (Kevin Harvick, Kyle Busch, Matt Kenseth, Joey Logano, Brad Keselowski, Martin Truex Jr. and Jimmie Johnson). Hamlin will still be one of the best choices at the Superspeedways (Daytona and Talladega), Phoenix, Martinsville, Richmond and Homestead.

Hamlin will be one of my drivers to start the season in Fantasy Live. He is so good at Daytona that it is risky to leave him off your team. I doubt he will be priced to high as well. Last year Hamlin was priced at about $26 for most of the season. This made him a good third pick for your team. I expect him to be priced around the same this year and be one of the better choices in the Fantasy Live game.