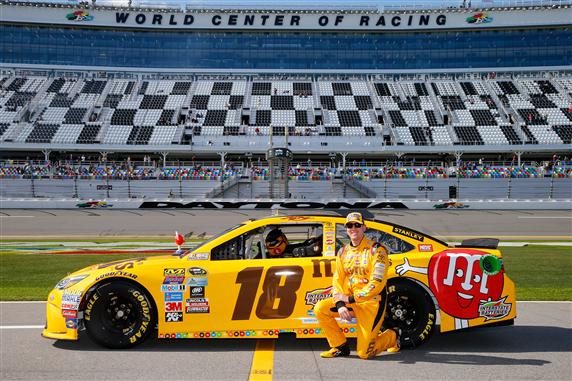 The 2017 NASCAR season is right around the corner. In order to get fantasy teams ready for the new season I decided to recap the 2016 season for my top 30 drivers and preview how I think they will perform this year. Only two drivers left in my rankings. I had a hard time choosing between No. 1 and No. 2, but I decided to list Kyle Busch in the runner-up position on my list.

2016 RECAP: Kyle Busch backed up his championship season of 2015 with another fantastic season in 2016. Busch won four races (Martinsville, Texas, Kansas and Indianapolis), scored an outstanding 17 top-five finishes and 25 finishes in the top 10. He was also able to lead 1,379 laps and won two poles (Phoenix and Indianapolis). Busch was one of the best choices for fantasy teams in 2016.

Busch was a flat track expect in 2016. He scored the most points (822.5) in Fantasy Live at the short flat tracks (Phoenix, Martinsville, Richmond and New Hampshire) and the most points (189.5) at the large flat tracks (Pocono and Indianapolis). Busch was also good at the 1.5-mile tracks. He scored the fifth-most points (698.5) on these tracks in 2016. It is easier to name the tracks where he struggled (he finished 38th and 39th at Bristol) than it is to list all of the tracks where he ran well.

Busch was an elite pick in Group A of Yahoo Fantasy last year. He scored bonus points for qualifying in 11 of the races and bonus points for leading laps in 26 races. His ability to consistently finish in the top five made him one of the top picks in the game. His best races were at Martinsville, Kansas and Indianapolis.

Busch came close to winning back-to-back championships last year, but the racing Gods decided it would be a better story to have Jimmie Johnson win his seventh title. Busch will definitely be one of the drivers competing for the championship next season.

2017 PREVIEW: Everything will be the same for the No. 18 team in 2017. Adam Stevens will once again serve as the crew chief and M&M’s will serve as the primary sponsor. Stevens and Busch have proven to be a good combination and they are starting to work together as well as Jimmie Johnson / Chad Knaus and Brad Keselowski / Paul Wolfe. What separates the No. 18 from the rest of the field is the strength of their pit crew. All of the Joe Gibbs Racing cars are able to make up time in the pits and that is a huge advantage in racing.

Kyle Busch was once again placed into Group A of Yahoo Fantasy. He will be one of the best choices at every race because he has no weakness. I consider Busch a must start driver at Indianapolis and Texas. Busch has won back-to-back Brickyard 400s and he finished second at the track in 2014. Busch has been the most consistent driver at Texas. He has finished seven of the last eight races at the track in the top five, including two wins. I expect Busch to be in Victory Lane shooting the six shooters again in 2017.

I expect Busch to be one of the highest priced drivers in Fantasy Live. He deserves every penny that fantasy players have to spend to add Busch to their teams. He scores many bonus points for leading laps and fast laps. If for some reason he qualifies poorly, Busch is one of the best drivers in the field at making his way to the front from the back of the pack. Busch can be considered a good pick at tracks in Fantasy Live.

If Joe Gibbs Racing is going to win another championship in 2017, I think it will be the No. 18 car that gets the job done. Busch has matured as a driver the past two seasons and he seems to be on top of his game right now. I had a hard time not ranking him No. 1 on my list, but the driver I have at No. 1 has pretty good fantasy stats as well.