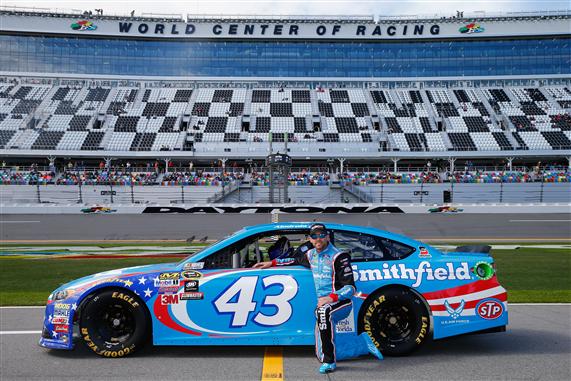 The 2017 NASCAR season is right around the corner. In order to get fantasy teams ready for the new season I decided to recap the 2016 season for my top 30 drivers and preview how I think they will perform this year. Each day I will post two driver previews until my No. 1 fantasy driver is revealed. No. 28 in my rankings is Aric Almirola. Richard Petty Motorsports scales back to one team in 2017 and that could affect Almirola’s fantasy value this season.

2016 RECAP: Aric Almirola had his worst full-time season in the Sprint Cup Series. He finished 26th in the Point Standings, did not finish any races in the top five, had only one finish in the top 10 (Talladega) and only led one lap (Talladega). His average starting position was 23.9 and his average finishing position was 23.3. Almirola was a driver who usually finished right inside the top 25. His best tracks in 2016 were the flat tracks (Phoenix, Martinsville, Richmond and New Hampshire). Almirola scored the 20th most points in Fantasy Live (211.5) on these types of tracks. His best race in 2016 came in the Daytona 500. He qualified 34th and finished 12th, scoring a season high 56 points in Fantasy Live.

Richard Petty Motorsports is considered a middle of the pack organization and they were beat by some of the less funded teams last year. It did not help that Almirola had Brian Scott as a teammate. I think a more veteran driver could have helped the organization figure out what was needed to generate more speed in their cars, but the team decided to shut down the second team for the 2017 season.

2017 PREVIEW: The competition is tough in the Monster Energy NASCAR Cup Series, so it is hard to imagine the No. 43 team making significant improvements in 2017. Richard Petty Motorsports will be able to focus all of its resources on Almirola this season and not have to worry about a second car. This should help Almirola slightly, but not enough for him to climb into the top 25.

Almirola has been good (not great) on the small tracks and the large tracks. He runs well at Richmond, Phoenix and Dover, but he can also be considered fantasy relevant at Daytona and Talladega. After such a poor season it will be interesting to see where his price is at in Fantasy Live. If he is priced under $13 Almirola will be a good fourth driver for your team. I would not pay much more than $13 for the No. 43 car in Fantasy Live unless he shows he can finish consistently inside the top 20. Almirola will not have any value in the Yahoo game in 2017. There are much better options in Group B of Yahoo Fantasy.