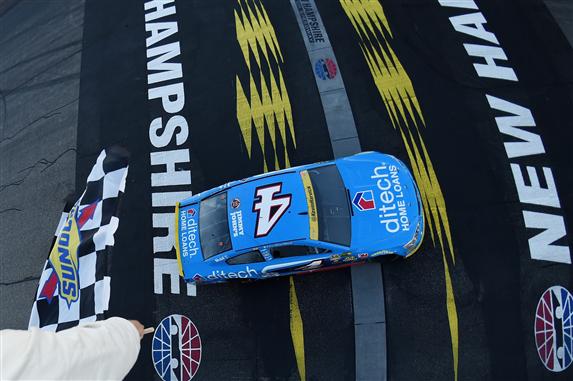 The Monster Energy NASCAR Cup Series travels to Loudon, New Hampshire this week for the Overton’s 301. The race can be Sunday at 3pm ET on NBC Sports Network. Be sure to test your knowledge of NASCAR by competing in the Fox Sports Fantasy Auto Racing.

New Hampshire is a short, flat track that races much larger than it is. The 1,500 foot straightaway requires drivers to carry a lot of speed into the corners. This causes the car to use a lot of brakes. We saw teams have problems with brakes at Phoenix and Martinsville. The same problems could appear Sunday.

Track position will not be as important at New Hampshire as we have seen the last month. Drivers can make a pass by out-braking the competition and getting into the throttle quickly out of the corners.

The scoring system for the Fox Sports Fantasy Auto Racing game rewards drivers who improve their position in the race more than the drivers who lead the most laps. Selecting the drivers who start outside the top 10 but inside the top 25 will give your team the best chance to score position differential points Saturday night.

Martin Truex Jr. ($10,300) should be considered the favorite at every track until another driver steps up and proves they can knock him off the top spot. The No. 78 team said they are tired of being labeled the best team at the 1.5-mile tracks. They want to prove they are good at all tracks so they are working hard to make a statement at New Hampshire. I would not bet against them. Truex qualified 2nd, led 141 of the 300 laps and finished 7th in the last race at New Hampshire. He should lead the most laps and finish in Victory Lane Sunday.

Kevin Harvick ($12,500) is always considered the master at the flat tracks. He is almost unbeatable at Phoenix, runs very good at Richmond and he is one of the most consistent drivers at New Hampshire. Harvick finished 4th in the July race at New Hampshire and won the race in September. He has finished 4 of his last 5 races at the track in the top 4. Harvick is a safe pick for your team.

Kyle Busch ($11,400) keeps knocking on the door to Victory Lane but he just can’t seem to break through. Most of his problems have to do with competing against the No. 78 car. Busch is very good at New Hampshire so he will have a good chance to win the race Sunday. He has finished 7 of his last 8 races at the track in the top 8 (including 4 races in the top 3). Could this be the week Busch ends his winless streak? He will definitely be up front Sunday.

Matt Kenseth ($11,000) has been the best driver at New Hampshire since he joined Joe Gibbs Racing. Before joining JGR Kenseth was 0-26 at the track. Since joining JGR Kenseth has won 3 of 8 races (including 6 finishes in the top 5). Kenseth has finished the last 3 races at the track in the top 2. If he is going to win a race before leaving JGR it will happen at New Hampshire Motor Speedway.

Joey Logano ($10,100) must be upset that his win at Richmond was taken away. Instead of being securely in the playoffs, he now finds himself on the outside looking in. Logano is good on the short flat tracks. He won at Phoenix last year and won at Richmond this year. Logano has finished 4 of the last 5 races at New Hampshire in the top 4 (including a win in 2014). The No. 22 car should be in the top 5 this week.

Brad Keselowski ($9,400) started the season red hot but he has been in a slump since the race at Kansas. His average finishing position in the last 7 races is 24.4. That makes him a hard driver to trust. If Keselowski is going to get back on track it will happen at New Hampshire. He has been very good on the short flat tracks. He finished 5th at Phoenix and 2nd at Richmond. Keselowski finished 4th in the last race at New Hampshire and if the No. 2 team can keep from beating themselves they should finish in the top 5 Sunday.

Dale Earnhardt Jr. ($8,400) has been written off by most Fantasy NASCAR players but he has not been running as bad as people think. Earnhardt has finished 5 of the last 6 downforce races in the top 12. He has also finished 4 of the last 5 races at New Hampshire in the top 10. He is a good value because of his price. Earnhardt probably will not lead any laps but he should finish in the top 12 this week.

Erik Jones ($7,800) said that each race he is gaining experience in the MENCS car and it is becoming easier for him. You can tell by the results. Jones has finished in the top 10 in the last 2 races. He does not have any experience in the MENCS at New Hampshire but that should not slow him down. Jones qualified 2nd and finished 2nd in his only Xfinity Series race at the track.

Ryan Blaney ($7,700) does not have the best stats at New Hampshire but his price is too cheap to ignore. Blaney finished his both races at the track in the top 12 last year. The Wood Brothers Racing car has more speed this year and Blaney has more experience. I expect him to run in the top 10 Sunday.

Daniel Suarez ($7,500) is another rookie driver who should not be overlooked this week. Carl Edwards always ran very well at New Hampshire in the No. 19 car so I expect the team to give Suarez a car capable of running up front Sunday. Suarez has competed in 2 Xfinity Series races at New Hampshire. He finished both races in the top 5. Suarez should run in the top 15 this week.

Here are my pre-qualifying picks for the Overton’s 301: