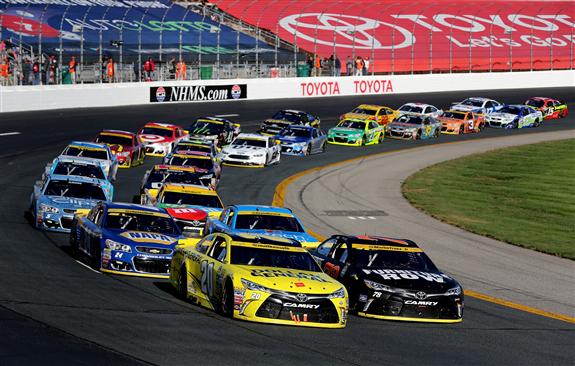 The Monster Energy NASCAR Cup Series travels to Loudon, New Hampshire this week for the Overton’s 301. The race can be Sunday at 3pm ET on NBC Sports Network. Be sure to test your Fantasy NASCAR skills in the Yahoo Fantasy Auto Racing game.

The Yahoo Fantasy Auto Racing game is starting to become frustrating and it does not look like it will change any time soon. The allocations limit the number of times fantasy players can use Martin Truex Jr. and Kyle Larson. It looks like these two drivers will be up front leading laps each week. We cannot use them in every race so there will be times (like last week) where we just have to hope the drivers we selected can keep up with them. I plan to use Truex and Larson for qualifying points and save them for the 1.5-mile tracks in the playoffs.

The race at New Hampshire should give fantasy teams an opportunity to pivot from Truex and Larson without losing too much ground. There are about 10 drivers who run very well at this track. The problem is that most of them are in Group A this week. I looked at track history, results from Phoenix and Richmond and current momentum to select my team this week.

Martin Truex Jr. does not have the best stats at New Hampshire but he is still the best pick. The team said they want to make a statement this week and prove they are not just good on the 1.5-mile tracks. I think they will get the job done. I recommend saving your allocations with Truex for the cookie-cutter tracks in the Playoffs but if you have 6 or more allocations with the No. 78 car it would be a good idea to have Truex on your team this week.

There are five drivers worth consideration in Group A. Matt Kenseth has been the most dominant driver at New Hampshire since 2014. Kyle Busch has been knocking on the door of Victory Lane and it will be hard to fade him this week. Kevin Harvick is a good pick because he is so good on flat tracks. The 2 Team Penske Racing drivers (Brad Keselowski and Joey Logano) have good stats at New Hampshire but they are hard to trust right now.

Kevin Harvick is always considered the master at the flat tracks. He is almost unbeatable at Phoenix, runs very good at Richmond and he is one of the most consistent drivers at New Hampshire. Harvick finished 4th in the July race at New Hampshire and won the race in September. He has finished 4 of his last 5 races at the track in the top 4. Harvick is a safe pick for your team Sunday.

It was really difficult to decide between Matt Kenseth and Busch this week. Kenseth has finished the last three races at New Hampshire in the top 2, but I trust Busch more this season.

Busch is a very good pick for New Hampshire. He has finished 7 of his last 8 races at the track in the top 8 (including 4 races in the top 3). Last year Busch qualified 2nd, led 133 laps and finished 8th. This track has been very good for Joe Gibbs Racing. I would not be surprised to see Busch finally make it to Victory lane Sunday.

It is going to be more difficult to find 4 good drivers in Group B this week. Kyle Larson is the best pick but I am fading him this week since I want to save his allocations for Michigan and the 1.5-mile tracks in the playoffs. If you have 6 or more allocations with Larson (I am not sure why you would), I would suggest using him this week. Larson is almost a lock for a top 5 finish.

There are some drivers you can use this week to save allocations. Ryan Newman, Kurt Busch and Kasey Kahne have been good at the short flat tracks in their career. I like Newman more than the other two drivers because Kahne and Busch tend to be hit or miss at this track. My luck has not been good with the No. 5 and No. 41 cars so I will leave them off the team this week.

Do not look at the recent stats at New Hampshire for Bowyer. He was the king at this track when he raced for Richard Childress Racing. He has 2 wins at the track and I expect the Stewart-Haas Racing car will be fast this week. Tony Stewart drove the car that Bowyer will be in to a 2nd place finish in this race last year. He will also have the help of the No. 4 team this week (Harvick won the last race at New Hampshire). Bowyer desperately wants to get back to Victory Lane. He should be up front Sunday.

Blaney does not have the best stats at New Hampshire but he should run well this week. Blaney finished his both races at the track in the top 12 last year. The Wood Brothers Racing car has more speed this year and Blaney has more experience. Blaney is very good at qualifying up front and track position is king at this track. The No. 21 car should finish in the top 10 this week.

McMurray is my insurance policy Sunday. I am low on allocations with the No. 1 car so I really do not want to use him in the race. McMurray has run well at the short flat tracks and he is almost a lock to run in the top 10 this week. I will be glad I have McMurray on my team if one of my other 3 drivers does not step up this week.

I am going to gamble with Newman this week and see if it pays off. Newman has won three races at the Magic Mile but it has been a long time since he visited Victory Lane at the track. Usually a good strategy beats a fast car at New Hampshire. Richard Childress Racing used the winning strategy to get Newman to Victory Lane at Phoenix and they did it again at Charlotte with Austin Dillon. Newman is a safe pick to save allocations with your top drivers this week.

It looks like Aric Almirola will be returning to the No. 43 car either at New Hampshire or the following week at Indianapolis. This means we will no longer be able to use Bubba Wallace Jr. I have been fading him because I think Michael McDowell is a good pick as well, but I kind of wish I had Wallace last week at Kentucky.

The two best choices this week are Erik Jones and Daniel Suarez. These two drivers are performing much better than your average rookies. Ty Dillon has been on the decline so I see no reason to use any drivers other than Jones and Suarez this week.

Jones said that each race he is gaining experience in the MENCS car and it is becoming easier for him. You can tell by the results. Jones has finished in the top 10 in the last 2 races. He does not have any experience in the MENCS at New Hampshire but that should not slow him down. Jones qualified 2nd and finished 2nd in his only Xfinity Series race at the track. I expect him to run in the top 10 Sunday.

Suarez is another rookie driver who should not be overlooked this week. Carl Edwards always ran very well at New Hampshire in the No. 19 car so I expect the team to give Suarez a car capable of running up front Sunday. Suarez has competed in 2 Xfinity Series races at New Hampshire. He finished both races in the top 5. Suarez should run in the top 15 this week.