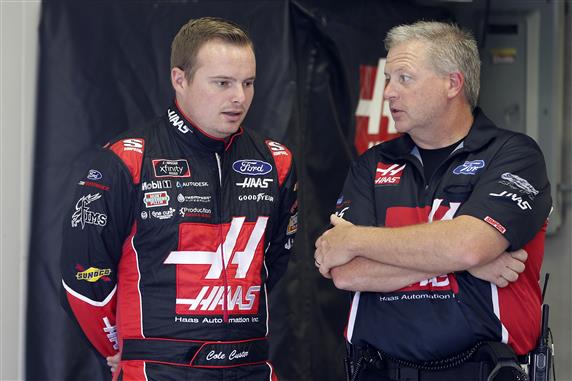 The double-header at Pocono is complete and now NASCAR is set up for another double-header. This time it will be a NASCAR + IndyCar double-header at Indianapolis Motor Speedway. It would have been cool to see some of the Cup Stars pull the double this weekend but it looks like that is not going to happen. The Cup Series will be on the main tack Sunday. Here are my notes from last year’s race at the Brickyard…

– The Track: The race was dominated by Kevin Harvick but the 2019 aero package made the racing slightly better at the Brickyard. It is no secret that this track is not made for big, heavy stockcars, but NASCAR is doing their best to keep the cars closer together. There were 14 lead changes but Harvick was still able to pull away and win by 6.118 seconds. The racing in the middle of the pack was pretty good though.

Indianapolis has one of the narrowest pit roads on the circuit. Many of the drivers had accidents or other problems when all 40 cars were on pit road at the same time. It will be important to select drivers who qualify up front and have the premium pit stalls so they can avoid the traffic on pit road.

– Martin Truex Jr. had the completely wrong setup for qualifying. The No. 19 car had to start in the 27th position and he was not able to gain too many position early in the race. Truex’s day got worse when he was hit from behind by Clint Bowyer on pit road on lap 12. The team spent the rest of the race trying to fix the damage and Truex was never a factor in the race. He finished 27th. (The No. 19 car was already locked into the playoff so they had little to gain in the race. Their race probably would have been different if they had more to race for).

– Kyle Busch had a great day until they waived the green flag to start the race. He was awarded 15 bonus points for winning the Cup Series regular season championship just for starting the race. He also won the Xfinity Series race the day before. Busch qualified 7th and was making his way to the front when his car blew up on lap 87. Busch went to the garage and finished 37th.

– Denny Hamlin entered the race on a hot streak after a series of good runs in the summer. His momentum was broken when he crashed his primary car in practice and had to go to a backup and start in the rear of the field. Hamlin started 33rd and quickly made his way through the field. The No. 11 car finished 8th in Stage 1 and 6th in the race. Hamlin finished 2nd the year before at the Brickyard so this is a good track for him.

– Erik Jones qualified 14th and he was looking for a solid points day to move up in the playoff standings. He did not get it. Jones moved up into the top 10 when he was battling Brad Keselowski for position on lap 49. The two cars got together and both were taken out of the race. Jones finished 39th.

– Brad Keselowski won the race at the Brickyard in 2018 and he was looking to make it back-to-back wins at the historic track. Keselowski qualified 6th and he was running in the top 10 when he got spun around by Erik Jones. The No. 2 car went flying through the air and landed on the tire barriers. Keselowski finished 38th. (It was a horrific crash)

– Joey Logano had a great race. He has never won at the Brickyard but he consistently finishes in the top 10. Logano has a 5.8 average finishing position at the track since he joined Team Penske Racing in 2013. Logano qualified 4th and had a 5.18 average running position (3rd best). Logano won Stage 1 and finished 4th in Stage 2. He led 11 laps and was able to bring the No. 22 car home in the 2nd position.

– Ryan Blaney had the 2nd best car in the race (Behind Kevin Harvick). Blaney qualified 9th and spent the entire race up front. Blaney had a 3.78 average running position (2nd best). He finished 4th in Stage 1 and 3rd in Stage 2. The No. 12 car led 19 laps (2nd most in the race) but lost track position on the late-race restarts. Blaney finished 7th.

– Kevin Harvick was easily the fastest driver in the race. The No. 4 car won the pole and took the early lead. He used quick pit stops and a fast car to lead a race-high 118 laps. Harvick also finished 3rd in Stage 1 and won Stage 2. Harvick had a race-best 1.89 average running position and went to Victory Lane for the 2nd time at the Brickyard. (Harvick has a 4.6 average finishing position at Indianapolis since he joined Stewart-Haas Racing)

– Clint Bowyer entered the race on the playoff bubble. He needed as many points as possible so the No. 14 team used pit strategy to finish each Stage in the top 10. Bowyer finished 5th in Stage 2 and a quick pit stop allowed him to keep his track position in the final Stage. Bowyer finished the race in the 5th position and secured his spot in the playoffs. (This was his 2nd consecutive top-5 finish at the Brickyard)

– Chase Elliott had an eventful race. He qualified 24th and moved his way to the 16th spot when the caution flag came out on lap 12. Elliott was spun out on pit road by Paul Menard. It caused Elliott to come out of the pits in the 35th position. He spent the rest of his day trying to get his track position back. Elliott had a fast car though and was able to finish the race in the 9th position.

– William Byron surprised a lot of people when he was able to outrace Kyle Busch to win an Xfinity Series race at Indianapolis in 2017. He proved he could compete in the Cup Series at the Brickyard with his 4th-place finish last year. Byron qualified 22nd and Chad Knaus worked on a tight racecar to give Byron more speed. The car came to life in Stage 2. Byron finished 9th in the Stage and worked his way to the front in the final Stage. Byron was able to finish 4th in the race.

– Alex Bowman had a faster car than his 21st-place finish suggests. Bowman qualified 13th and he spent a lot of the race running in the top 10. His average running position was 13.09 (11th best) despite spinning out on lap 134. The wreck ruined a good race for the No. 88 car.

– Jimmie Johnson looked good in practice and he looked good early in the race. He needed all of the points he could get to make the playoffs. Johnson qualified 5th and he was running 6th early in Stage 1. He was involved in an accident on pit road and it sent the No. 48 car back in the pack. He moved his way up through the field and was able to finish 8th in Stage 2. His playoff hopes and his race were ended when Johnson was caught up in the “Big One” on lap 105. Johnson finished 35th in the race.

– Kyle Larson had one of the best cars at the Brickyard last year but he had nothing to show for it. Larson qualified 19th and he quickly made his way to the front. Larson finished 2nd in Stage 1 and 2nd in Stage 2. The No. 42 car was also able to lead 5 laps in the race. Larson’s day was ruined when he was spun out in turn 2 on lap 129. He finished the race in the 33rd position. Matt Kenseth will drive the No. 42 car Sunday.

– Kurt Busch looked like the best car in practice. He qualified 8th and he was running in the top 5 until the caution on lap 12. Busch got into Chris Buescher on pit road. The No. 1 car had a tire rub so Busch had to return to the pits to fix the damage. It ruined Busch’s race. The No. 1 car finished in the 30th position.

– Ryan Newman had to gain as many points as possible to secure his spot in the playoffs. No driver is as good as Newman at points racing. He did his thing at the Brickyard last year. Newman qualified 22nd and he slowly made his way to the front. The No. 6 team used pit strategy to finish 5th in Stage 1. Newman ran around the 12th spot for most of the day and he was good on the late-race restarts. Newman ended up in the 8th spot. He scored 14 place differential points for DFS teams.

– Ricky Stenhouse Jr. qualified 12th and his car looked good in traffic. The draft really came into play at this track and Stenhouse used side-drafting and momentum to pass cars. His aggressive driving did not pay off though. Stenhouse got into two wrecks on pit road and it caused him to finish in the 31st position.

– Chris Buescher had a good but not great race. He qualified 16th and he had a 16.48 average running position (14th best). Buescher was able to finish 10th in Stage 1 but did not score any points in Stage 2. Buesched only score 1 place differential point with his 15th-place finish.

– Austin Dillon had a decent race at the Brickyard last year. It was better for Fantasy NASCAR teams than it was for his race team. Dillon qualified 18th and spent most of the day running around the 19th position. When the pay window was opened, Dillon started to pick up some spots on the racetrack. Dillon finished 12th and scored 6 place differential points for DFS teams.

– Bubba Wallace had a fast car in practice and he told reporters that it was the best car he had ever had for Richard Petty Motorsports. He was right. Wallace qualified 15th and was involved in a wreck on pit road on lap 12. He was able to overcome his mistake and finish 3rd in the race.